The direct history of our product PureSaffraan® goes back to the 16th century region Souktana district Taroudant (southeast middle Morocco). In the region of Talouine you will find a remarkable place that is called the ‘cave collection’ or ‘Agadir’ or ‘Ighrem’ which is Berber (original Moroccan language before Arabic arrived) for ‘fortress’. On the picture you can see that out of the rocks some sort of vault collection has been created with the rock as chamber and before that some sort of half castle was built. On this spot people used to save their most valuable possessions such as money, gold but also Saffron. 800 chambers which were protected by bodyguards, soldiers. Besides from that documents were found in this area of more than 200 years old mentioning the allocation and designation of the different grounds on which Saffron is grown. It is obvious that the growing of Saffron is a long existing craft and that is also to be noticed in our outstanding quality of our PureSaffraan®. 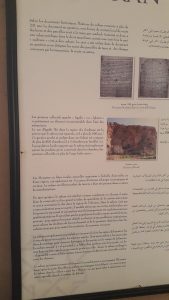 There are theories stating that Saffron was first grown in Greece. Like a genetic monomorphic clone it was spread slowly throughout big parts of Eurasia and was later brought to parts of North-Africa, North-America and Oceania. The saffron crocus, unknown in the wild, is probably descending from the Crocus cartwrightianus, also the Crocus thomasii en Crocus pallasi are possible other sorts that are involved in the mutations. As Crocus sativus is a mutated form of Crocus cartwrightianus, it could have originated through plant breeding that would have selected oblong stigmas in the late Bronze Age in Crete. The written history is being testified in a botanic memoir from the 7th century before Christ that was composed by Ashurbanipal from Assyria and Saffron was merchandised and used for over four millenniums. Iran now stands for approximately 90% of the global production of Saffron.

A certain amount of uncertainty exists around the origin of the word ‘Saffron’- however it can be traced back that it directly arose from the 12th century French term safran – which came from the Latin word safranum. Safranum is coming from the Persian mediator زعفران or za’ferân. Old Persian is the first language in which the usage of Saffron in the kitchen has been recorded with referrals that go back to thousands of years ago. In fact some sources claim that it is originating from the Middle-East/Persia en was associated with the Greec, Spanish and Indian kitchen.

Saffron was described in the 7th century before Christ in an Assyrian botanic memoir that was put together by Ashurbanipal. Documentation was found regarding the usage of Saffron over a timeframe of 4000 years for the treatment of as much as 90 diseases. Saffron-based pigments are indeed found in 50.000 year-old images of prehistoric places in the northwest of Iran. The Sumerians later used the   Saffron that grew in the wild for their cures and magical potions. Saffron was an article for the long distance trade for the Minoan palace culture in the 2nd millennium before Christ. Old Persians cultivated Persian Saffron (Crocus sativus ‘Hausknechtii’) in Derbena, Isfahan and Khorasan around the 10th century before Christ. In these places the saffron threads were woven in textile and ritually offered to gods and used in colorants, perfumes, medicine and to wash the body. Saffron threads could be spread over beds and mixed with hot tea as a cure for bouts of melancholy. Non-Persians feared also the Persian use of Saffron as drug or aphrodisiac. During his Asian campaigns,, Alexander the Great used Saffron in his infusions, rice and baths as a cure for the battle scars. Alexanders troops copied the practice of the Persians and brought the saffron leaves to Greece.

Contradicting theories declare the arrival of Saffron in South-Asia. Kashmiri and Chinese calculations date her arrival somewhere between the 2500-900 years ago. Historians that studied the old Persian reports date the arrival somewhere before 500 before Christ, attributed to a Persian transplant of Saffron corns for new gardens and parks. Phoenicians treated Kashmiri-Saffron around that time as a colorant and for the treatment of melancholy. After that the usage of it in nutrition and colorants spread along South-Asia. Buddhist Monks wear Saffron colored robes; however the robes are not dyed with the valuable Saffron, but with kurkuma, a less expensive colorant, or with jackfruit. Robes of monks are painted in the same color to show the similarity to each other and kurkuma or oker were the cheapest, most obvious colorants.

Some historians believe that Saffron came to China together with the Mongolian intruders from Persia.

Nevertheless Saffron is mentioned in the old Chinese medical texts, including the fourty-volume pharmacopoeia named Shennong Bencaojing ( 神农本草经: “Shen Nongs fantastic herbs”, otherwise known as Pen Ts’ao or Pun Tsao) a bookwork that dates from 300-200 before Christ. Traditionally ascribed to the legendary Yan (“Fire”) Keizer (炎帝) Shen Nong, discusses the 252-phytochemical-based medical treatments for various conditions. All the same around the 3rd century after Christ the Chinese refer to Saffron as the having of a Kashmiri origin.

According to Chinese herbalist Whan Zen “The living area of Saffron is in Kashmir, where people manly cultivate it to offer it to the Boeddha.” Wan also reflects back on how it was used in his time:” The flower fades after a couple of days and then the Saffron is acquired. It is appreciated because of its uniform yellow color. It can be used to flavor wine.”

The Minoans portrait Saffron in their palace frescos from 1600-1500 before Christ; the point out the possible use of it as a therapeutic medicine. Old Greek legends speak of voyages to Cecily, where adventurers were looking for what they believed to be the worlds most valuable threads. Another legend is telling stories about Crocus en Smilax, in which Crocus is enchanted and transformed to the first Saffroncrocus. Old perfumers in Egyot, doctors in Gaza, townsmen in Rhodos and the Greek hetaerae courtisanes used Saffron in their aromatic water, perfumes and potpourris, mascaras and ointments, sacrifices for the gods and medical treatments.

In the late Hellenistic Egypt Cleopatra uses Saffron in her baths so that the courting would be even more pleasant. Egypt healers used Saffron as a treatment for all varieties of gastrointestinal diseases.

Saffron was also used as a fabric dye in Levantine cities as Sidon and Tyrus. Aulus Cornelius Celsus prescribes Saffron in medicine to heal wounds, coughing, colic and scabies and in mithridatium.

That the Romans loved Saffron so much is apparent from the fact that the Roman colonists took it with them when they settled in Southern Gaul, where it was cultivated on a large scale until the fall of Rome. Competing theories state that Saffron came back to France with the Moros in the 8th century or with the Avignon papacy in the 14th century after Christ.

The European Saffron cultivation went down after the Roman Empire was eclipsed. Like in France, the spreading of the Islamic civilization have helped to bring the plant back to Spain and Italy again. The 14th century Black Death caused a huge demand for Saffron based medicines and Europe imported large amounts of threads through Venetian and Genoese ships from Southern and Mediterranean countires, such as Rhodos. The theft of such shipments by nobility lead to the 14-weeks Saffron war. 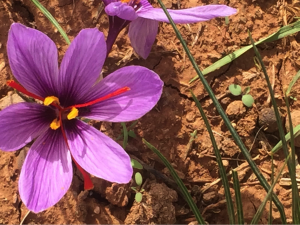